Fall 2004. On my way to the University of Ottawa bookstore to buy my Molecular Biology textbook.

I get to the University Centre and the centrecourt is packed with booths, tables, stands and people. As it turns out it is Club’s weeks which happens at the beginning of every semester. Cool, I think. But! I am on a mission. I’ve been told by my Molecular Biology professor that there was a screw up on the requisition and very few textbooks were ordered so I need to hurry up and get mine before they are sold out…. then I see some people dressed in Vintage (around the WW2 period) seemingly dancing in one of the corners. Naturally, my scientific mind wants to know what is that all about. I get closer and then I hear the music (hearing impaired here). And what do I hear? Wonderful Swing music!

I’ve been fascinated all my life with classic movies and particularly with Fred Astaire/Ginger Rogers, Gene Kelly movies. If I didn’t like my iPhone so much I would say that I was definitely born in the wrong decade. But I disgress. My heart is racing, who are those people dressed exactly like in my beloved movies, doing what I had seen so many times in those old Turner and MGM films from the first half of the 20th century? 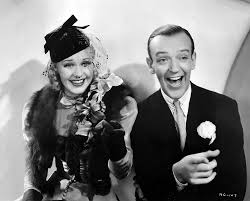 Now of course I absolutely HAVE to talk to those people and find out how I can get involved. It is the U of O Social Dance Club, they say (now known as SwingUO) and would you like to sign in for the term? how much is it? I ask – you know, broke graduate student and all. $15 they say. Per class? I ask. No, no, for the whole semester, they say. Sweet! where do I sign up?

That’s how I met Michelle, Bruce, Magali and Olivier, the founders of the club. I was hooked from day one. As a side note, I found out years later that I was the very first student to sign up and that they didn’t want to let me see the sign up sheet cause they were afraid I wouldn’t join if I saw there wasn’t anyone else there.

Magali and Olivier were my first Swing teachers. They thought me my first swing steps (step, step, rock step). It was Olivier who encouraged me to go to the Ottawa Swing Dance Society weekly dances.

And the rest is history, as they say. Within three months I was an executive member of the OSDS, six months later I was the house DJ. In 2005 I hired Byron Alley – then co-owner of the Swinging Air Force in Montreal, to come and teach a workshop in Ottawa. In 2006 I finally managed to convinced him (with the help of Bryn Morin and Natalia Rueda) to move to Ottawa and start a swing dance school here… but that’s another story.

The moral of this story? beware of trips to the bookstore. You never know where they are gonna take you!

2 thoughts on “Trips to the bookstore are dangerous!”