We didn’t win. We didn’t even place. But we got mad reviews from other dancers and great feedback from the judges.

One of our teachers came to us with a project last November: A Short Showcase Competition.

We have several competitions during the year but they are mostly in the Jack & Jill format (you sign up alone and are assigned a random partner) or the Jitterbug format where you sign with partner but do improvised dancing. We thought a short Showcase competition was a great idea and went along with it. The date was set for January 19 and the number of entries was limited to ten couples.

Apparently, there was a void in Ottawa for showcase competitions (where you sign up with a partner and perform a choreographed routine) because as soon as we opened registrations, it got sold out in a matter of hours.

This were the Contest Rules:

My daughter suggested I did a Blues choreography with Stefan, one of our up and coming students. It’ll be a lot of fun, she said. I’ll help you with it, she said. So we registered.

Then Christmas came, I got very sick and my daughter went to Colombia.

I took a deep breath, sat down and went through my Blues collection. After a few hours (I have about a couple thousand Blues songs) I picked up six or seven songs I thought were appropriate for the Showcase and emailed them to my daughter for review.

She discarded three -one because one of our teams have a routine to it, another because it’s been overplayed, and the third one, I honestly don’t remember. I got together with my partner and fortunately he agreed with the one I liked the most.

Good, we had a song!

But the song was 3:10 minutes long.  We studied it and decided to go with the song intro (approximately 10 seconds), chop the middle out, and keep the last 50 something seconds of the song.

With a great sense of accomplishment (ha!) we set to choreograph. It was my very first time choreographing a dance routing and I had a blast.

Then came the editing part. Which I had never done either. I had seen (ok, heard, rather) my daughter doing it but I had never used the software myself. That was a heck of a learning curve and I was getting very frustrated. Luckily the daughter’s boyfriend gave me a tutorial-via Skype, one night at 2 am and I got it done. Sort of.

After much coffee and swearing, I got it down to 63 seconds. But I was already late for the song submission so I sent it like that hoping they wouldn’t notice. The competition director did notice, edited the copy I submitted and sent me two versions: One was sped up 5% and the other cut at the beginning and at the end. Since I already had had to chop the beginning considerably during my editing in order to keep the time requirement – and therefore affecting the choreography, we went for the +5% version. 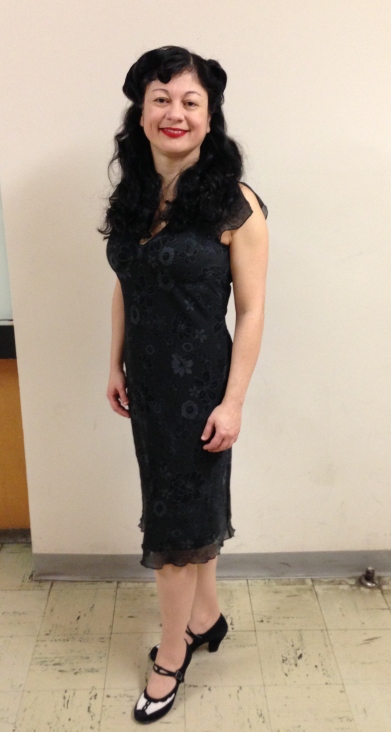 We went out and performed. It wasn’t our best run but it was pretty good. I think I forgot to mention it was my partner’s first Showcase competition. His first competition ever was the Pro-Am Jack & Jill where incidentally, he got me as a partner for the finals. And he won!

We didn’t win. We didn’t even place. But we got mad reviews from other dancers and great feedback from the judges.

They said that we definitely sold it. But we didn’t have enough dance content and we lost points because of that.

No matter. I am elated. I learned a lot. Both about audio editing software and the art of choreographing. And I felt pretty too!

Now, we can work on polishing and fine-tuning the routine for other Short Showcase competitions. Or we could even choreograph the rest of the song and bring it to the Canadian Swing Championships in May. We’ll see.

Without further ado, here it is, the video of our routine: