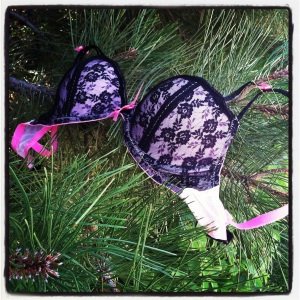 No, I didn’t ask that question at that resort where the Gemini Girl hangs out with her daughters.

I asked that question at my local Starbucks.

That of course, caused the staff to want to burst out laughing when I asked it. But since they’re Canadians, they were too polite to do so.

If you read my latest post, you know I have a little bra “problem” right now.

So, on Sunday, I decided that I needed to add one more bra to my current rotation of three. I went to mall and bought one. Then I decided to stop by Starbucks and see if they were still making my favourite drink, the caramel brule latte. They did so I got one and sat down to enjoy it while checking Twitter and Facebook.

Then went to the grocery store, got the groceries and went home. After I was finally settled at home, I realized that there was something missing. The bra never came home with me. And I couldn’t even remember with I had it when I was at the grocery store.

So yesterday, I went back to the mall, with little hope of finding it but willing to give it a shot. I started with Starbucks.

That’s when I asked, excuse me sir, have you seen my bra? Only that “sir” was a very cute boy about 18. He even blushed, I swear. The other barista, a young woman said she thought she had seen something in the back so the boy went to check.

Indeed he came back with a La Senza bag. He was too embarrassed to check inside to see if it was indeed my bag. But I guess the odds of two women leaving their bras behind on the same day are not very high.

Still, I made a point of checking the bag in front of them and saying that it was -as a matter of fact, the one I had bought the day before. 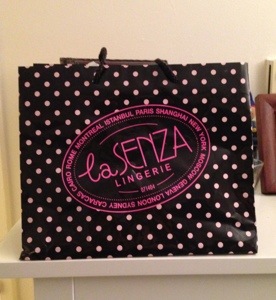 In the end, we all did have a good laugh together.

I hope I don’t have to ask that question again. Ever. Nobody wants to see an old lady’s bra.