I seem to have hit a major hindrance in blogging. It is not for lack of time or lack of subject. I have plenty of both. But I just can’t get started. It’s been more than a month since my last post and I even started one -which is still in draft, about Black History Month. Imagine! We’re past mid-March now.

So, since I can’t write, I’ll just share with you some of the drawings I did while in Lansingland. Yes, I did bring most of my art supplies with me. Of course I did. A girl can’t travel without them, you know…

Thing is, the Sidlets really like to draw. And they are both quite good in their different styles, I must say. They spend a lot of time arting, which I think is just the awesome. As it turned out, they really liked my pens and coloured pencils. One day, Sidlet # 2 was getting acquainted with my felt tip pens and drew several kitties, declaring that the pen was awesome. Then she moved onto homework and promptly forgot about the kitties. I – however, didn’t. I saved them, cut them out and gave them a playground:

Sidlet # 2 is very much into animals and fairies. She’s just a sweet little thing, so much that one is in danger of dying of cuteness overload when she’s around. She wants to be an animal doctor when she grows up. Maybe. I made this fairy for her and she put it up in her room right away. We forgot to name her, though: 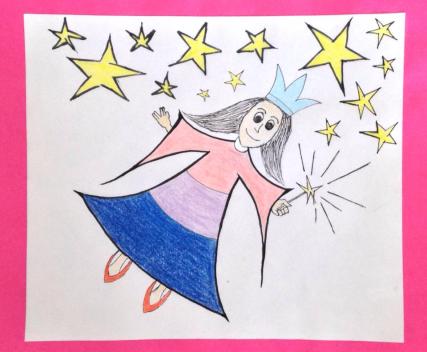 Also for Sidlet # 2: A nameless Fairy

Now, Sidlet # 1 is fascinated with Space, Star Wars, Star Trek* and My Little Pony (yeah, she’s cool like that). She wants to be an astronaut when she grows up. I’m telling you, this kid is cooler than cool. One day, we were talking about the Solar System and she mentioned that her favourite planet is Uranus. So I decided to make her a drawing of Uranus with three of its moons (it has 27). Here it is: 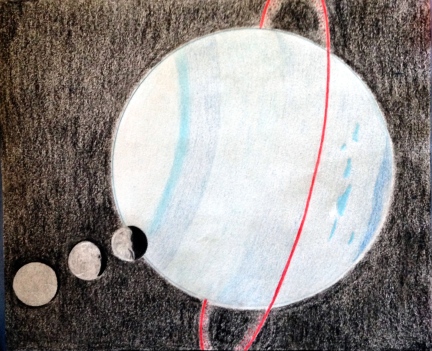 Right to left, Uranus, Ariel, Umbriel and Titania which are three of the five largest moons.

You should’ve seen her face when she saw it! She hugged it and then ran to her room and put it up too. Priceless.

* Both Sidlets are very knowledgeable about Star Wars and Star Trek, actually. Which of course, is but a testament to Sid’s coolness. Not wonder he is World’s Greatest Dad. 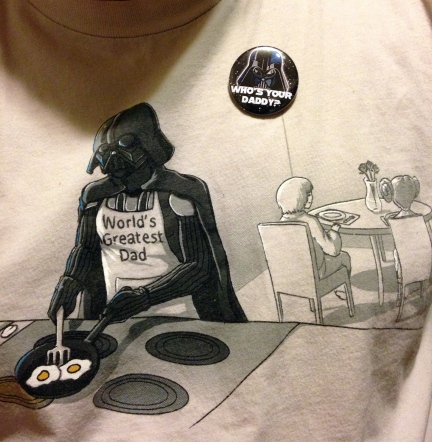 Who would’ve thunk. What I thought was going to be a wordless post, ended up being a regular post.

I might’ve done more art while I was in the land of the Spartans, but that’s all the pics I have, so that’ll have to do.

12 thoughts on “Arting in Lansingland”